Unofficial ATP transcripts for when you need to look up that episode that they bet on when ARM Macs would arrive.

Note that these statistics are generated from not perfectly accurate computer generated transcripts and speaker detection, so they're for fun as opposed to research.

Note: I did not include episodes that predated chapters in the below statistics.

Speaker Note: These counts will be higher than actual, as anytime two people were detected speaking we count all detected words during that period for both speakers.

Speaker Note 3: Pyannote speaker diarization is not correctly detecting all guests (episode 202 has some issues...), so counts are further inaccurate.

Below is a word cloud generated across all episodes. Note that I manually picked out a list of ignored words so more interesting ones came to the top. The full list is below. 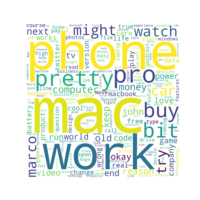